You are here: Home / Legal Aid 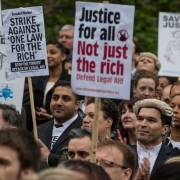 There was once a time when about 80% of all British People were eligible for legal aid. Hiring a lawyer doesn’t come cheap, but the government had sought to provide since 1949 a public pool of money for those who can’t afford to hire an attorney. The foundation of justice process was supposed to be made available to everyone in the country no matter how much they earn. If you are arrested, you are always entitled to free legal advice. The legal aid sector has traditionally been provided by almost a cottage industry of small legal firms, who then apply for funding on a case by case basis.

But over time and since the recession in 2008, that dropped down to now 29%. Cuts in 2004, 2006, and 2010 introduced fixed legal fees. Providers pulled out of complex legal areas like immigration and asylum. Legal aid services have needed to close or split focus towards more lucrative private work.

Then the 2013 Legal Aid, Sentencing and Punishment of Offenders Act (LASPO) happened.

What’s Wrong with the Old System?

It was argued that a reform for the £2 billion legal aid system because it was considered one of the most expensive in the world. Eligibility would be stiffened, those who earn more than £3000 pounds a month should be able to hire their own lawyers, and migrants would have to prove they were legal residents first.

It was supposed to be a plan to reform the system and save up to 350 million pounds per year. But among the slash cuts, the changes also meant that some types of cases were no longer eligible for public funds except in very specific circumstances – these include divorce, child contact, welfare and benefits, employment, criminal negligence, and housing law.

Huge areas of civil law were removed from the scope of legal aid, and these are the cases where the great bulk of citizens need assistance most often. Criminal cases remain in scope for legal aid, subject to testing for the economic means, but most people are not criminals and still need affordable legal advice.

For changes meant to provide more value to the taxpayer who pay the costs, it ended up impacting those who actually needed legal aid the most.

Is Brexit to Blame for This Too?

The cut to civil legal aid cases have already come into effect since 2013. So this was a pre-Brexit concern. However the reason for the budget cuts was to reduce the deficit, so certainly this chaos is only going to exacerbate the problem.

The lack of free legal advice has seen family courts increasing represented by people having to act as solicitors and barristers in their own cases ,i.e., litigants-in-person.

Parents found themselves forced to struggle alone, trying to navigate a system designed for highly trained professionals at a most emotional and vulnerable time in their lives.

“‘Since drastic cuts to legal aid in April 2013, we have seen children unable to enforce the rights and protections that the law provides to them. Without legal support, they and their families simply cannot navigate the complex legal processes they face, which have life-changing consequences,” said Professor Carolyn Hamilton, Director of Research and International Programmes at Coram Children’s Legal Centre.

When the cuts were introduced, the government expected advice agencies and law centers to naturally fill the gap – but they also had their budgets cut. Now all those who would have been given their due access to legal advice before now could only make do by their own bewildered selves or give up entirely.

Another consequence of legal aid cuts was the sharp decline in the number of couples that enter mediation to resolve their differences. Children were often a casualty of such heavily acrimonious exchanges.

“There are many outbreaks of bad behaviour in the family court. That’s why it’s good to have third parties there. For individual parents, it’s unendurable stress. It’s an arcane system and now there’s no one there to explain it to them,” said Penny Scott, a solicitor at Cartridges Law in Exeter and chair of the Law Society’s family law committee.

This leaves what the Law Society has termed “advice deserts”, large parts of the country where claimants cannot find any experts to consult.

“I would say be careful not to confuse legal aid solicitors with commercial or civil solicitors, who earn far more in general,” said Solicitor Alex Chapman. “My salary is comparable to a policeman or a plumber and we’re not paid quite as handsomely as you might think.”

Hope for the Future

In September of 2018, the Equality and Human Rights Commission (“EHRC”) published a report at the impact of the Legal Aid, Sentencing and Punishment of Offenders Act 2012 (LASPO) since it came into force in 2013. The conclusion has been that it was a pretty terrible affair at all levels.

Yes it has saved the government money, but at the cost of much more human suffering. “Labour helped these devastating legal aid cuts along. Now it’s time to fix it,” said former lord chancellor Charles Falconer.

Legal aid is a foundation for a civilized democracy. Without it, people cannot enforce their rights or defend themselves against the state. Legal advice and representation is similar to healthcare – it’s not something you wish to have to use, but should be there when you need it.